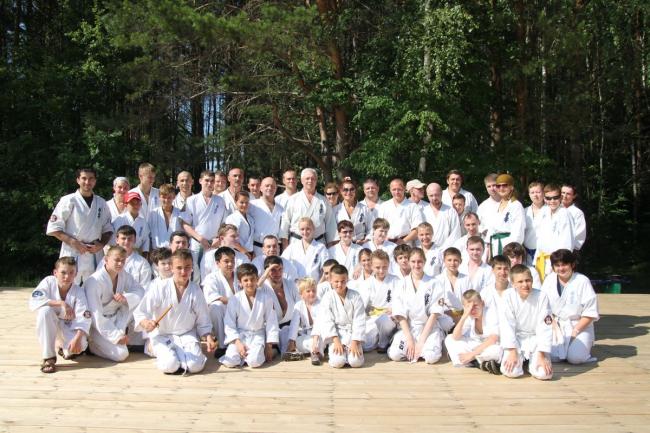 On 24 June – 1 July 2010 in Kremenki settlement near Serpukhov (Minatom of Russia “Kurchatovets” sanatorium) traditional inter-regional Summer Camp of SC “Bushido Mon” was held under direction of Shihan Victor Fomin. At this Camp more than 60 persons were gathered. Apart from SC “Bushido Mon”’ instructors and students there were leaders and students of Moscow clubs “Iceberg”, “Delta”, “Kaiman”, “Lefortovo”, “MAI”, “Hinode” and also masters from Tula and Yakutsk.

During this week (4 training sessions in a day) all intended syllabus was completely realized. It consisted of normative Kyokushin techniques from 10th Kyu to 3rd Dan, Kyokushin katas performed with knife, bo and sai, self-defense with weapons (knife, stick, bo and javara). The introductory course of self-defense with the modified javara on the basis of karate/knife system was held for the first time. The Camp was completed with grading examination, traditional tameshigiri with sword (in which all who wanted took part) and Sayonara party around a big fire.