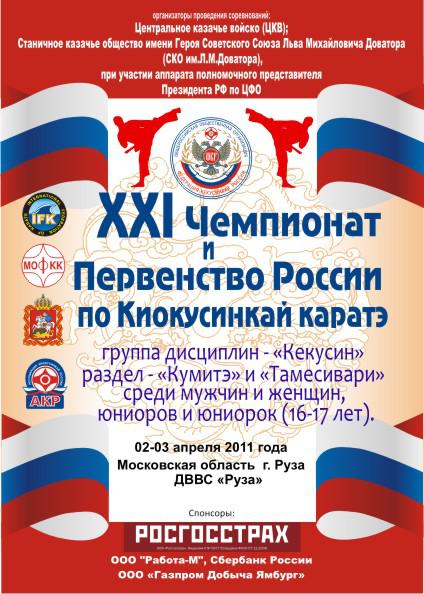 On the 1-3 April 2011 in Ruza, Moscow region, in the “Center of water kinds of sports” Sport Complex there were held Russia Kyokushinkai Championships among juniors (boys and girls) and adults (men and women). The organizer of the Championship – Russian Kyokyshinkai Federation and Moscow Region Federation of Kyokushinkai Karate. Main judge A.V.Bura (the 5th Dan). Main secretary – A.A.Khimichenko (the 3rd Dan). Responsible organizer of the competition the - President of the MRFKK V.N/Bogushov (the 4th Dan).

In the competition 241 fighters (2- HMS, 7- MSIC, 23- MS and 139- CMS) from 40 regions of Russia took part. Among them – champions and prize winners of International tournaments of different Kyokushin organizations.